Let's Get your Body in Shape with a friendly Detox

Some cleanses involve varying stages of starvation combined with laxative herbs and gallons of fiber drinks. But a good detox is actually easier—and tastier—than you might think. The goal is to stimulate liver enzymes, increase bowel movements to empty intestines of waste, and help the kidneys eliminate toxins that build up in your tissues, organs, and blood. It’s TLC for your digestive system, and it benefits every part of your body.

The key points:  First, Avoid  meat, cheese, fats, soy, chocolate, sugar, and salty foods. Second, emphasize lots of liquids and plant-based, high-fiber, organic foods to stimulate the colon and reduce intake of new toxins. Best of all, focus on foods with specific cleansing properties, starting with these delicious detoxifiers.
Try to include at least five of these in your diet every day, eating only enough to feel sated, never full. Stick to it, and you’ll see and feel results—more energy, clearer brain, and even weight loss—in as little as a week.


This edible flower bud augments the detox work of the kidneys and liver. It’s also rich in liver- protective agents, including cynarin, a compound that stimulates the liver and gallbladder. One artichoke contains a robust 10 grams of colon-sweeping fiber, for only 65 calories.

How to use: Steam and serve with a roasted red pepper sauce; toss bottled, drained artichoke hearts into salads and pasta sauces.

This spicy root (it looks like a large, white carrot) is traditionally used to clear mucus from the body and remove toxins. Daikon, like other brassicas, contains a group of cancer-fighting chemicals called glucosinolates, including glucobrassicin. Chewing daikon releases an enzyme that eventually converts glucobrassicin into diindolylmethane (DIM), a compound that neutralizes harmful forms of estrogen.

How to use: Peel, grate or shred, and layer into sandwiches; cut into coins for crudités; toss chunks into bean stew.

How to use: Stir 2 tablespoons ground flaxseed daily into cereal, smoothies, or juice


Like rosemary, antibacterial garlic encourages production of glutathione, a potent detoxifying antioxidant, enabling the liver to complete the detox process.   It’s also high in sulfur-containing compounds and antioxidants that protect cells from damage.

How to use: Mash or mince one clove daily and eat it raw or lightly cooked; mix into hummus, blend into dressings, or eat straight up.


Long known for its antioxidant and anti-inflammatory benefits, green tea also supports the liver and increases detoxifying enzymes—in one study, by as much as 80 percent. Its mild caffeine content, along with calming L-theanine and alkalizing properties, make it a good way to start your day during a cleanse.


Leafy greens such as spinach are alkalizing, and are rich in blood-cleansing and cancer-preventive chlorophyll. Choose watercress, arugula, collards, kale, and other members of the brassica family, and you’ll also help your body eliminate harmful forms of estrogen.

How to use: Blend avocado, frozen banana, light coconut milk, and a handful of baby spinach for a detoxifying smoothie.

How to use: Squeeze half a lemon in warm water or green tea and drink every morning to stay hydrated and stimulate intestinal- tract muscles.


“This herb is a powerful liver stimulant that can double the quantity of bile and therefore reject toxins,”.  It’s also rich in carnosic acid, a compound that helps the body produce detoxifying glutathione.

How to use: Mince and sprinkle on cooked root vegetables; blend into salad dressings.

They’re alkalizing, like leafy greens, vegetables also contain carbohydrate- like compounds called fucans, which reduce inflammation in the body, and some research suggests they benefit the liver and protect the body from radiation.

How to use: Think of seaweed as an herb or vegetable. Toss a piece or two of dried wakame or hijiki into a pot of soup or add a bit of flavor  to salad dressings. Sprinkle kelp seasoning onto popcorn. Use sea palm or kelp noodles for pasta dishes.

How to use: Look for ground turmeric in bulk; work up to 1⁄4–1⁄2 teaspoon daily, sprinkled on scrambled eggs, added to marinara or pesto, or stirred into cooked brown rice. (Be careful, it stains!)

Remember to  start slowly with any detox cleaning. And consult with your doctor before doing a detox.
Posted by Unknown at 6:39 PM 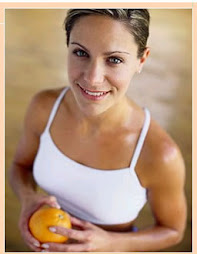